No Knead Bread in a Dutch Oven 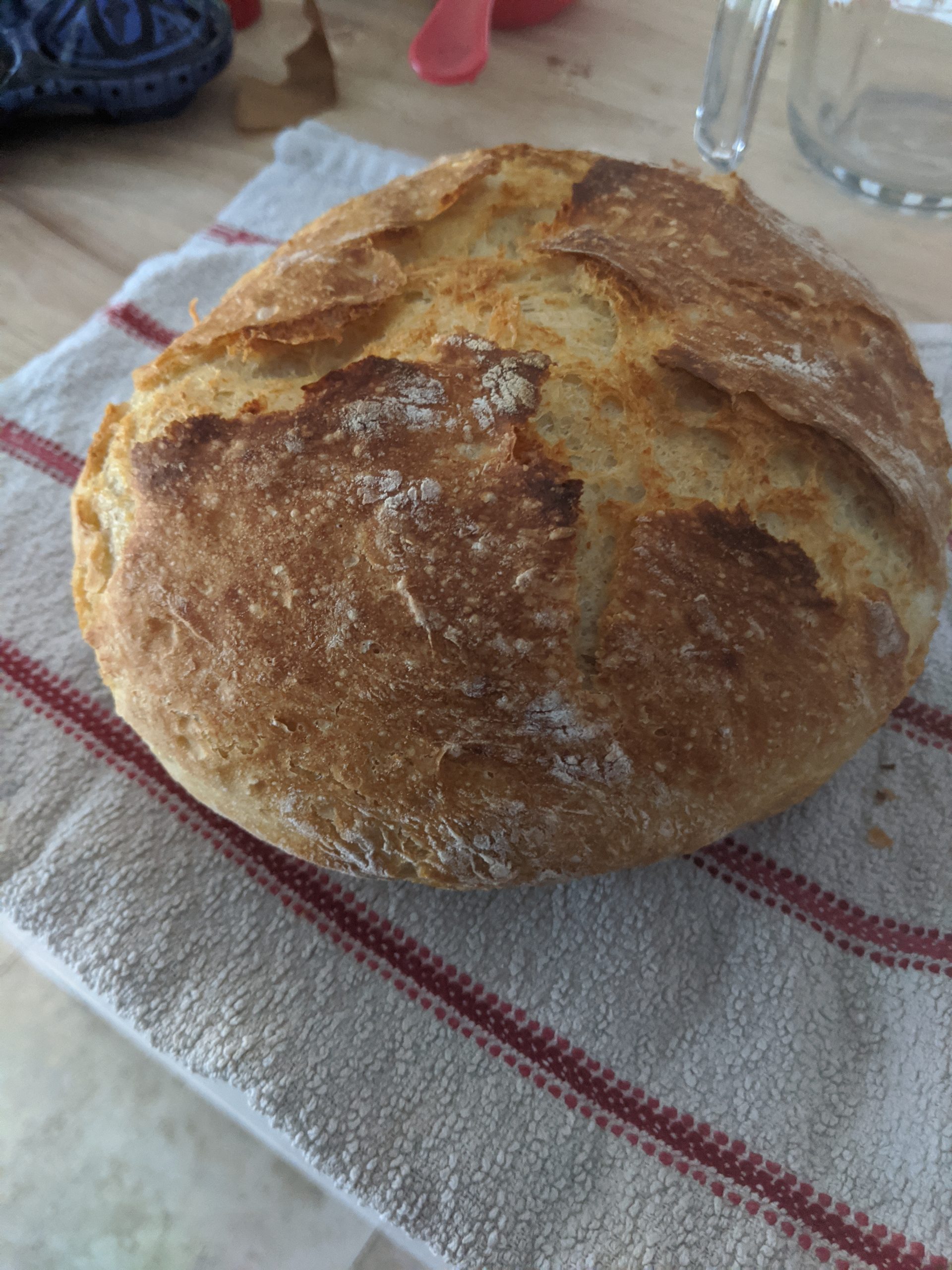 First, this is the perfect recipe to make if you want to impress someone. Seriously. It will look like you went out and bought bread from somewhere fancy. But you didn’t. Because you found this awesome recipe and you made it yourself.

Since I’ve begun my new chapter at a Stay at Home Mom, I’m trying to save money where I can, and cook/eat more healthy meals. While I was working, I tried to do that, but I failed. Often. Especially when I only had a few hours in the evening with the baby, and I didn’t want to spend it all cooking (If baby would have even allowed that!)

Now that I’m home, we’re still trying to get into a routine. It’s harder than it sounds. He’s still getting used to having me all the time. And I’m getting used to that too.

Cooking has been hard, because he wants attention, and because right now he decided that with everything else, he wants that one last molar out to join the others. And when he cuts teeth, he hurts. When he hurts, he wants Mom. All the time.

I don’t blame him. Most of us want Mom when we don’t feel good, right? That’s one thing that doesn’t go away with age, if we’re being honest.

Anyhoo, this week has been kind a struggle with that. But I did get him to let me make this bread. Mostly because it takes next to no time, really. It’s all about the waiting.

It’s as easy as this – dump all the ingredients in a bowl (I’m kind of in love with this pottery mixing bowl I got in Pigeon Forge last summer. I love pottery.) and then mix them up. The dough is shaggy and sticky and wet, but it doesn’t matter.

One word of advice – traditionally I was always taught that the water you add to bread dough is supposed to be blood heat. In this recipe, you want hot water, but NO HOTTER than 130 degrees Fahrenheit. I used my thermometer to check the temp out of the faucet, and it was 115. (I also put my milk in the microwave for about 30 seconds to make sure it isn’t really cold when I mix it with the water.) Totally fine. If you aren’t sure, make sure you check. If the water is too hot, you’ll kill the yeast, the bread won’t rise, and your bread will be a hockey puck.

After you mix it, you cover the bowl with plastic wrap and leave it somewhere for about two hours. Maybe three if its a cold day.

Then you dump it onto a floured surface and shape it. Which in my mind means I just sort of coated it in flour and then made sure it was a vaguely round loaf shape. I also used a bowl scraper I have, which I do recommend. You can use your hands, but the dough will be really sticky.

Once you do that, clean out your bowl (or use another – whatever makes you happy) and put a piece of parchment inside. You then just dump your loaf in the parchment, cover the bowl with a towel, and preheat your oven to 450 degrees. Make sure your Dutch oven, with the lid on, is inside. You want to preheat it as well.

A word to the wise – make sure that your Dutch oven has an oven safe lid handle. Most of them do, but it would be a bad time to discover it isn’t.

If you are looking for a recommendation for a Dutch oven, I LOVE my enameled cast iron one from Lodge.

Once your oven is preheated, CAREFULLY remove the Dutch oven, and transfer the loaf and parchment into the dutch oven. Then pop on the lid, and put it back in the oven for 30 minutes. At the end, pull it out, remove the lid, take out the parchment and put it back int he oven for anywhere from 5 -15 minutes, depending on how dark you want your crust. This step makes it extra crusty on the outside, because when the lid is on, you’re basically creating the steam that commercial ovens have in them.

I’ve tried putting a pan of boiling water in the stove to get a crispy crust, and it works, but this is SO much better.

I put mine back for 10 minutes, and that was perfect for us, because I don’t like it super dark. But you do you.

Then try not to cut it right away. Let it cool for 10 ish minutes. Or seconds. Whatever you make it to.

Slice it up, impress your friends, and enjoy!

It may not look pretty, but these turkey meatballs

My crock pot has decided this morning is the time

I actually won something! Thank you to @simplyglut

These were a first experiment making springerle co

One of my favorite things about the holidays is ma