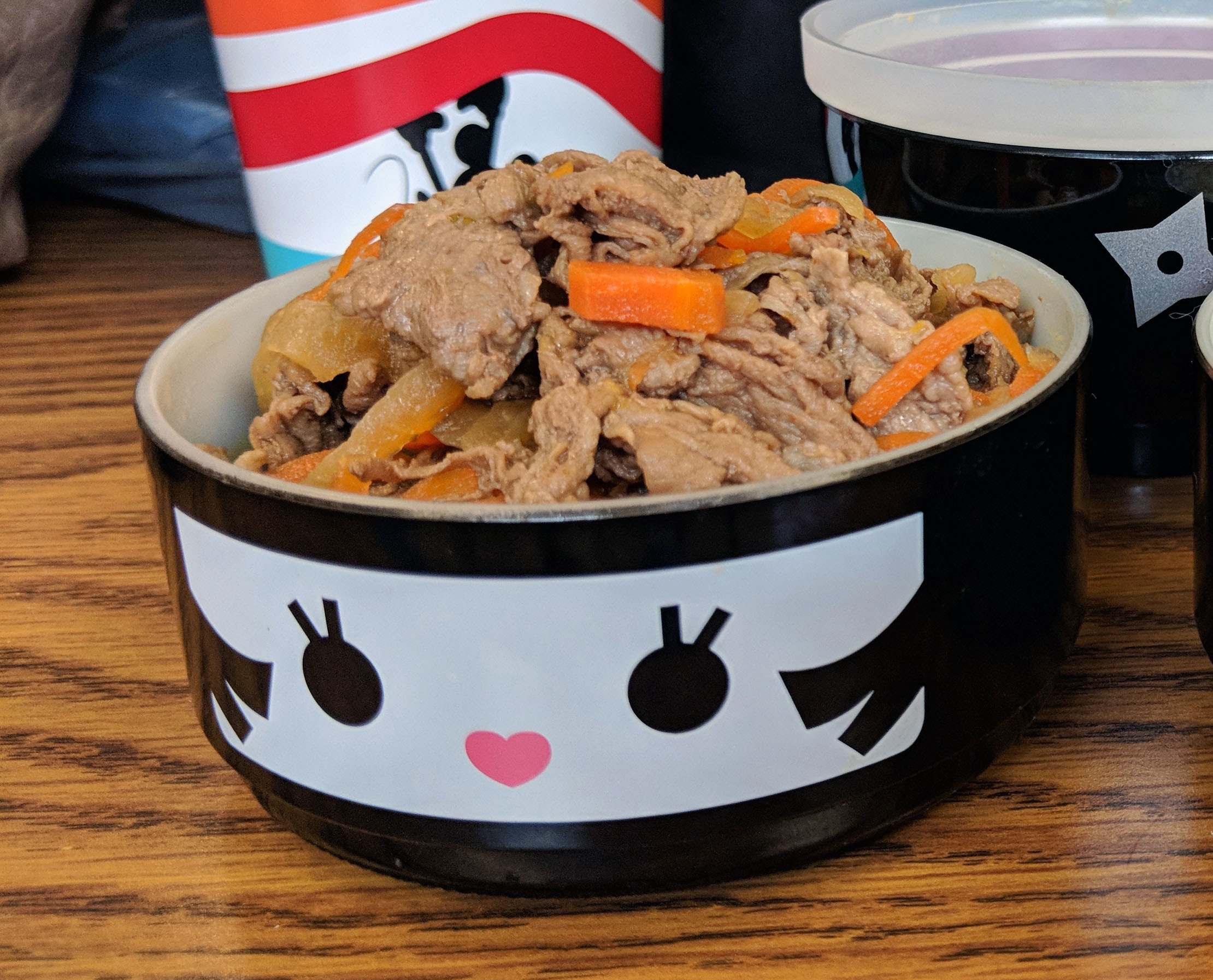 This post contains affiliate links. I may earn a small commission if you purchase an item I link to on this website. Your purchase helps support the maintenance of this blog and the creation of the recipes I share with you.
I came across the recipe for this really awesome Sukiyaki on the Disboards from the Yakitori House in Japan. The recipe sounded delicious, but I didn’t want to use noodles. Mostly because I already had rice (I buy it in 25 lb bags, since its cheaper that way and we eat it frequently.)
With that in mind, I modified the recipe a bit. And it was so, so worth it!
I also must admit that I bought beef already shaved at the grocery store. Its meant for steak sandwiches, but I knew I wouldn’t be able to slice it thin enough without freezing it a bit first, and frankly, I was hungry!
Also on the list of things I didn’t have –  I didn’t have dashi, or the supplies to make it. I’ve wanted to try it for a long time, but we have no international markets around us. Its weird, but when I go visit the parents next I’ll make sure I stop by the Japanese market there. Since I didn’t have it, I substituted beef stock. It worked just fine for me!
This recipe is super, super easy!

First, make rice according to the directions on your package. I make rice in a rice cooker, according to the directions my Hawaiian roommate taught me. Her method has never failed me. I’d explain, but it really needs a video, because its not traditional measuring.
I recommend you slice all the veggies in advance. It will make life much easier. I use a fancy tool I bought at a local craft show that juliennes the veggies. You could easily do it by hand, but I was going for quick. I sliced the onions as thin as I could, and then sauteed them for about 5 minutes over medium heat with a little oil. Once they were starting to get a bit translucent, I added the carrots and about 1 c of stock. Then I covered it for 5 min to let them soften a bit.
While the carrots were going, I mixed up the sauce ingredients. Of which there are only three. It doesn’t seem like it will have that much flavor, but it is deceiving! Its a mixture of soy sauce, mirin, and dashi, or in my case, beef stock. I just stirred it together and then left it to the side in a bowl until I needed it.
Once that was done, I scooped the veggies into a bowl, and dropped in the beef. I was using a ceramic no-stick pan (which I highly recommend) and there was a little oil left from the veggies, so I didn’t need any extra. You may need to add a bit of oil to the pan. It is extremely thin beef, so it takes almost no time to cook. Once it was mostly cooked, I put the veggies back in, and then poured the sauce ingredients over it, and let it simmer for about 5 minutes to finish cooking the beef.
It was so, so good! Enough that I took photos…. and then realized after dinner the card wasn’t in the camera. So instead of the beautiful bowl from the Japan pavilion, you’re getting a shot of my lunch the next day in my totally cute bento box. (I may have a bento problem. lol)

I must admit that I might have let my stomach rule when I bought the beef, so it made enough for huge dinner portions, lunches, and leftovers the next night. You could easily make this half the amounts and get enough for 3-4 people. if you wanted the sauce thicker, I would add a tablespoon of cornstarch mixed into 2 tablespoons of water, but I actually like it thin like this. With noodles it would make awesome soup (which is, of course, kind of what it was supposed to be anyway).